The researchers’ coordinated field efforts are made to study the status and change of the Arctic ecosystem. Together, the measurements will lead to a better understanding of how variations in the Arctic Ocean are interconnected, how the carbon and ecosystems respond to climate change, and how chemical and biological disturbances in one region can spread to another. When scientific studies are conducted across several Arctic regions simultaneously, researchers can gain an understanding of the systems’ basic structures and functions.

Meet some of the participants in Synoptic Arctic Survey 2021.

The research expedition Synoptic Arctic Survey, originally planned for 2020, had to be postponed due to the pandemic. Now, this year's expedition starts off by 38 researchers being quarantined at a hotel in Malmö on 16 July.

Synoptic Arctic Srvey is focused on a single, overarching question: What are the present state and major ongoing transformations of the Arctic marine system?

The expedition is organized around three major research areas

The rationale behind the expedition

The Arctic is the part of our planet that is currently most affected by global warming, which makes it an important region to map. Changes in the Arctic will affect humans, animals and plants in the area, but it will also affect our entire planet. The Arctic Ocean is the least studied ocean at the same time as it is of great importance for the Earth’s climate.

SAS will enable both theoretical and quantified forecasts by the researchers modeling physical, biological and chemical data. This will form an important basis in future climate models and an increased understanding of currently relatively unknown processes in an Arctic that is constantly changing. The data collected under SAS will provide a unique point of reference that will allow researchers to track climate change and its effects in the Arctic in the coming years, decades and centuries. Both future generations of polar researchers and decision-makers will benefit from such a point of reference.

The expedition starts on July 16 with an individual quarantine for the participants. On July 26, 2021, the icebreaker Oden departs from Helsingborg and on August 2, the observations in the Arctic Ocean begin. The estimated return to Helsingborg is September 20, 2021.

The map shows the planned survey area for Oden’s part of the Synoptic Arctic Survey expedition with eight stages (leg 1-8).

The Swedish SAS program consists of 16 work packages where all projects contribute to different parts of the international SAS program. A total of 38 researchers will be on board Oden. In addition, a number of shore-based researchers are also participating in the project. Maria Samuelsson, maria.samuelsson@polar.se, will be the Swedish Polar Research Secretariat’s Expedition Coordinator on board.

In the Swedish part of Synoptic Arctic Survey, 39 researchers from 14 institutions participate.

Cooperation with the Swedish Maritime Administration 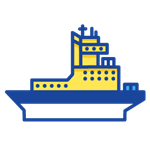