Everything south of 60°S is considered the Antarctic. This means that the Antarctic consists not just of the continent, but also the surrounding islands, seas, and ice shelves. No people live in Antarctica, although researchers and tourists do visit for some or all of the year.

Because Antarctica was isolated from the surrounding land­ masses for many millions of years, it has large areas of untouched natural environment. Preserving the region and its unique environment is also valuable from a research standpoint.

Important research projects are being conducted in Antarctica. For example, researchers drill ice cores and collect bedrock samples. Analyses of these samples can indicate how the climate has changed during the Earth’s development. Armed with that knowledge, we can try to predict the Earth’s future climatic development. Other researchers are looking for fossils in order, for example, to determine what animals lived in Antarctica mil­lions of years ago. Such knowledge can help them understand how changes in Antarctic biodiversity are connected to changes in the ecosystem.

The weather is most favourable during the Antarctic summer, and each year some 40,000 tourists travel to Antarctica to experience its unique environment.

Respect the scientific activities in Antarctica, and do not disrupt ongoing research projects. 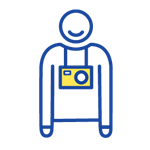