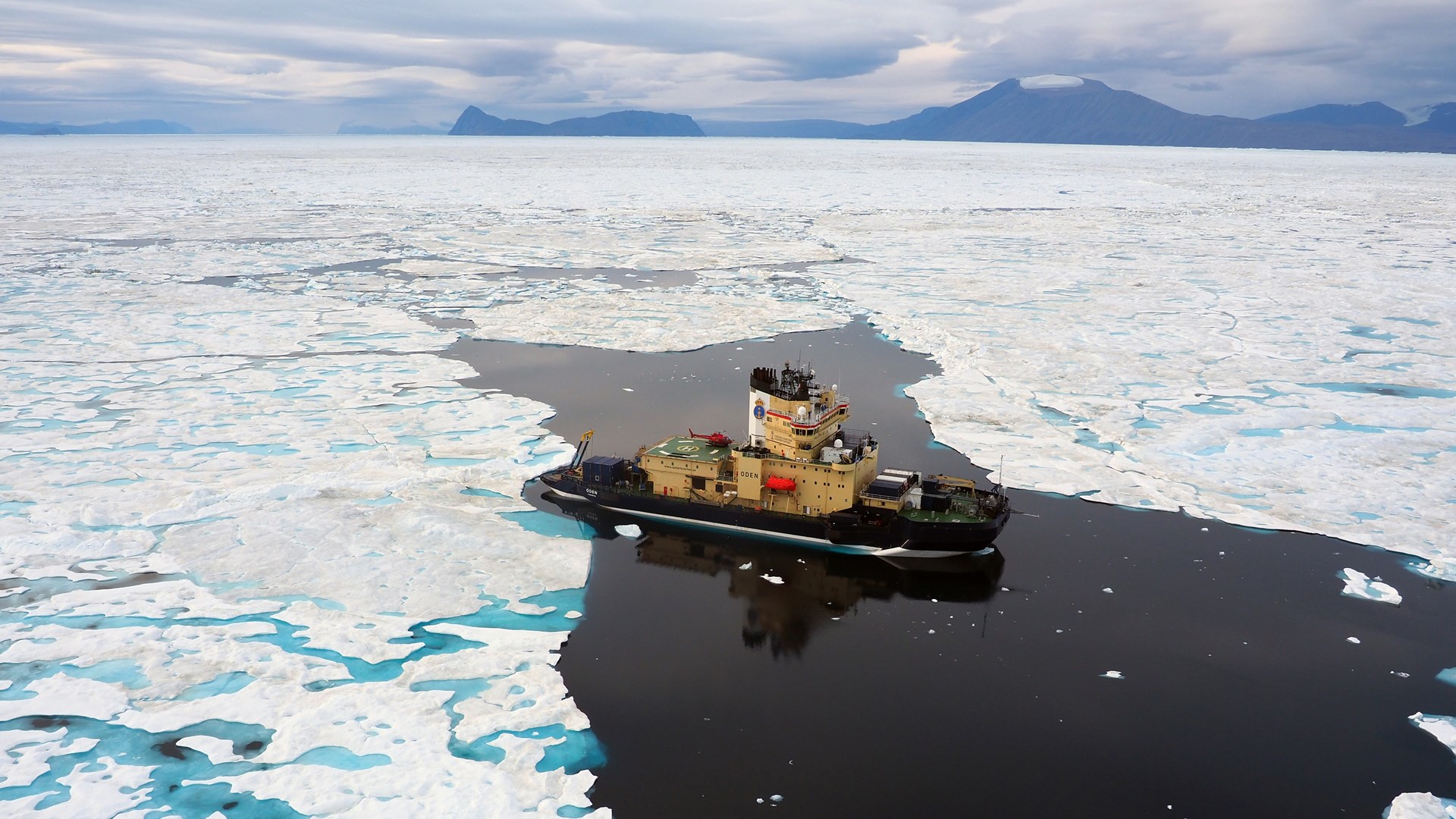 Icebreaker Oden outside the Sherard Osborn Fjord, which connects the Ryder Glacier to the Lincoln Sea. Photo: Martin Jakobsson.

The Ryder 2019 Expedition with Swedish icebreaker Oden took place from early August to mid-September 2019 and included marine as well as land-based research. The overall scientific goal was to gain a better understanding of how climate affects the sensitive high Arctic environment. Chief Scientists at the Ryder expedition were Martin Jakobsson and Larry Mayer. Both were more than pleased with the expedition, where they managed to get to previously unexplored areas.

– It was one of the most successful expeditions I participated in, and surely the most difficult in terms of sea-ice and iceberg conditions. We experienced a spectacular environment and gathered unique data that give high prospects for new scientific discoveries, says Martin Jakobsson, Professor of Marine Geology and Geophysics, Dept. of Geological Sciences, Stockholm University.

Want to understand the processes behind shrinking glaciers

The land-based part of the expedition carried out ecological and archaeological studies to understand the area’s environmental history, which includes animal and plant ecosystems as well as human settlements. The majority of the scientific crew worked together towards a set of defined goals involving data collection in the marine environment from icebreaker Oden, which managed to reach the unexplored Sherard Osborn Fjord, connecting the Ryder Glacier to the Lincoln Sea. Almost two per cent of the Greenland ice sheet is drained via this fjord. One of the main research questions the expedition set out to answer was why the marine glaciers on northernmost Greenland have undergone such a rapid retreat. Ryder is one of these glaciers that meets the sea, commonly called a marine outlet glacier.

– The warming climate generally means that glaciers are melting faster, which in turn raises the global sea level. But factors affecting mass loss of marine outlet glaciers also include whether warmer seawater reaches the fjords and melts them from below. The presence of so-called ice tongues (called ice shelves in the Antarctic) and how the seabed looks also affects the stability of the marine outlet glaciers, says Martin Jakobsson and continues:

– During the expedition, we collected data about the depth, structure and geological composition of the seabed, the physical and chemical characteristics of the seawater, and meltwater flow from the glaciers. These data have already provided great insight into the processes that control mass losses of Greenland’s ice sheet and enable us to improve our numerical models. The ultimate goal is to use improved numerical models to predict and assess the extent to which the reduction of Greenland’s ice sheet contributes to sea-level rise.

The preliminary results from the data collection show that the seabed in Sherard Osborn Fjord has two major bathymetric highs, acting as sills in the fjord, of which the inner partly constrain the inflow of warmer subsurface water of Atlantic origin from reaching the Ryder Glacier. It is a plausible explanation why the Ryder Glacier has not lately withdrawn as much as most other marine glaciers in Greenland. Another valuable contribution is that data from the seabed contribute to The Nippon Foundation – GEBCO Seabed 2030 project, which is about mapping the entire global seabed by 2030.

Martin Jakobsson emphasizes how important it is to be able to carry out expeditions in the high Arctic because it is an environment that is extremely sensitive to the changes in the climate that is happening now.

– It is essential that we understand the response of this region to these changes. Still, it is logistically very difficult to carry out science programs in the ice-covered high Arctic in general and especially in the area north of Greenland where the thickest sea ice tends to accumulate. Accessing this region on a platform with Oden’s capacity is an opportunity of a lifetime for a scientist. The results of the expedition will add significantly to our understanding of the marine cryosphere, which is the part of the earth’s surface that is in contact with the sea and consists of ice and snow. Being able to contribute to such a successful mission means a lot to me personally and certainly to the researchers who participated.

Going on longer expeditions for over a month is a challenge, but according to Martin Jakobsson, life on board is facilitated by how well the research icebreaker Oden is adapted for research.

– The ship is remarkably accommodating in almost every way conceivable – the cabins are comfortable, the food is fantastic, the camaraderie among the science team and crew is excellent, and the scientific equipment on board is mostly state of the art, but now needs upgrading and renovation to keep going. Still, the most impressive aspect is the crew and the skills of the crew and support team from the Swedish Polar Research Secretariat, and their willingness to do what it takes to help fulfil the scientific mission. This is what I think distinguishes Oden from most other vessels. Without Oden, it would be impossible to conduct eminent research relating to the central Arctic, says Martin Jakobsson. 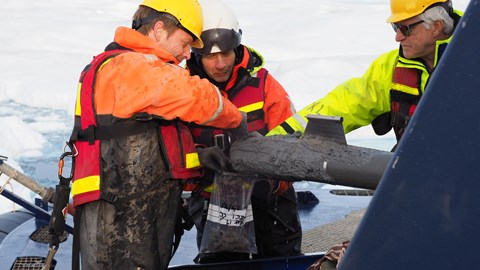 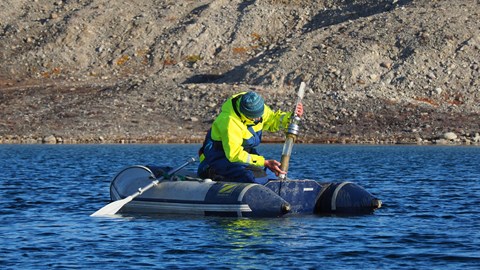 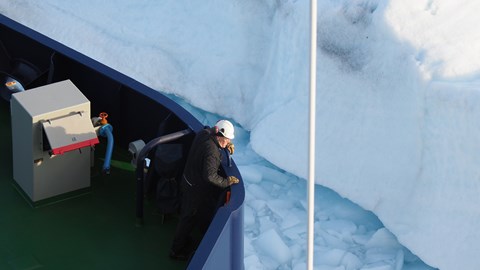 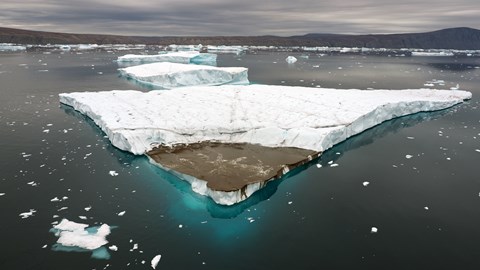 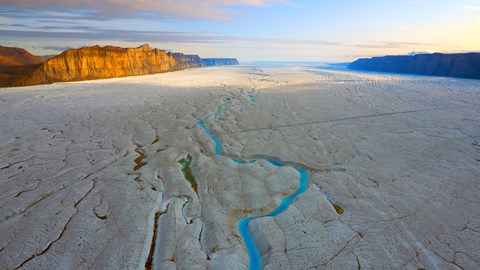 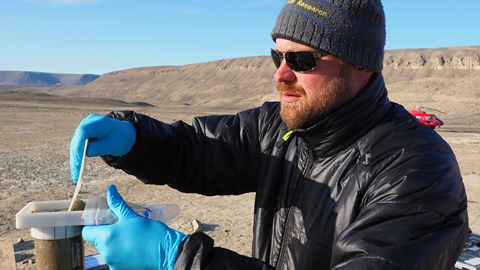 “Without Oden, it would be impossible to conduct eminent research relating to the central Arctic” – Martin Jakobsson.