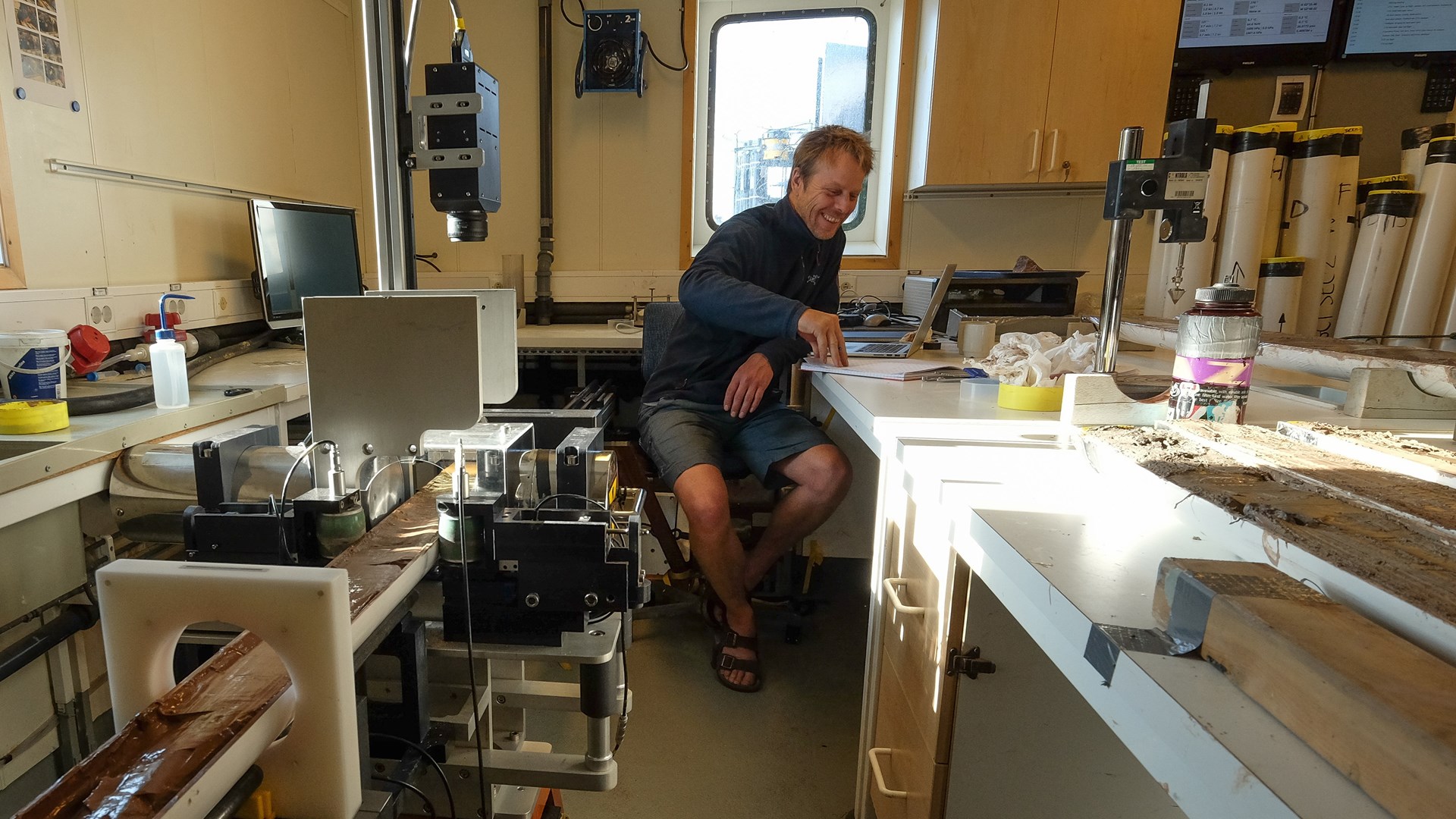 The melting of the sea ice in the Arctic and the faster melting of Greenland’s ice cover are two prominent environmental changes that could accelerate sea level rise in the future. Researchers are therefore working on a broad front to better understand the mechanisms behind the melting ice and what consequences it will have.

Matt O’Regan is a researcher at the Department of Geological Sciences at Stockholm University. His research group participated in the polar expedition to the Ryder Glacier and the adjacent Lincoln Sea in northern Greenland during August and September 2019. To understand the geologic history of ice in this remote region of the Arctic, they examined 125 meters of marine sediment from 26 coring stations in Sherard Osborn Fjord, Lincoln Sea, Hall Basin and the Petermann fjord. Marine sediments are materials that were continuously deposited on the seafloor as the extensive ice cover that characterized the last glacial period broke up.

– We place our observations in a broader context regarding natural climate variations and investigate the driving mechanisms behind ice melting and the environmental consequences that accompany them. The locations we surveyed in northern Greenland are believed to be of crucial importance for the stability of the Arctic sea ice in a warmer climate, making insights into its past variability important for understanding modern change, says Matt O’Regan.

The Ryder Glacier in north western Greenland drains about two per cent of Greenland’s ice sheet. It has a 25-kilometre-long floating ice tongue extending out into Sherard Osborn fjord. The ice tongue is considered to have a very important function in stabilizing the glacier and preventing an accelerated mass loss that would contribute to raising the global sea level. Ryder’s ice tongue has been relatively stable during the time of satellite measurements, unlike, for example, the Petermann glacier further south.

– The harsh ice conditions in the area mean that there are no previous marine sediment cores that can provide a longer perspective on the interaction between the glacier, ice tongue and sea ice in this region. The lack of data and the ability to compare the Ryder Glacier with its southern counterparts made it particularly important to work in the Lincoln Sea and Sherard Osborn Fjord.

Matt O’Regan says they retrieved an exciting and comprehensive data set of the samples taken at sea to guide the more detailed shore-based analyses.

– Next, we will focus on an interesting sequence of sediment cores taken along a line in Sherard Osborn Fjord where we captured the gradual retreat and the potential dynamics of the ice tongue in the Ryder glacier. Now we will be able to continue with more elaborate analyses to document contemporaneous biological and oceanographic changes in the region.

The spectacular scenery and the feeling of coming to a distant place are positive memories that Matt O’Regan has from the expedition with the icebreaker Oden. But the strongest impression is linked to research.

– The excellent collection of multidisciplinary data from this region is something I remember from the expedition. The ship’s crew and the tireless efforts of expedition leaders have made this possible. I would say that it is one of the most exciting and multifaceted expeditions I have participated in. Oden is a fantastic vessel for scientific research that allows our research team to stay at the forefront of international Arctic marine geological research, says Matt O’Regan.

“Oden is a fantastic vessel for scientific research that allows our research team to stay at the forefront of international Arctic marine geological research.”
– Matt O’Regan