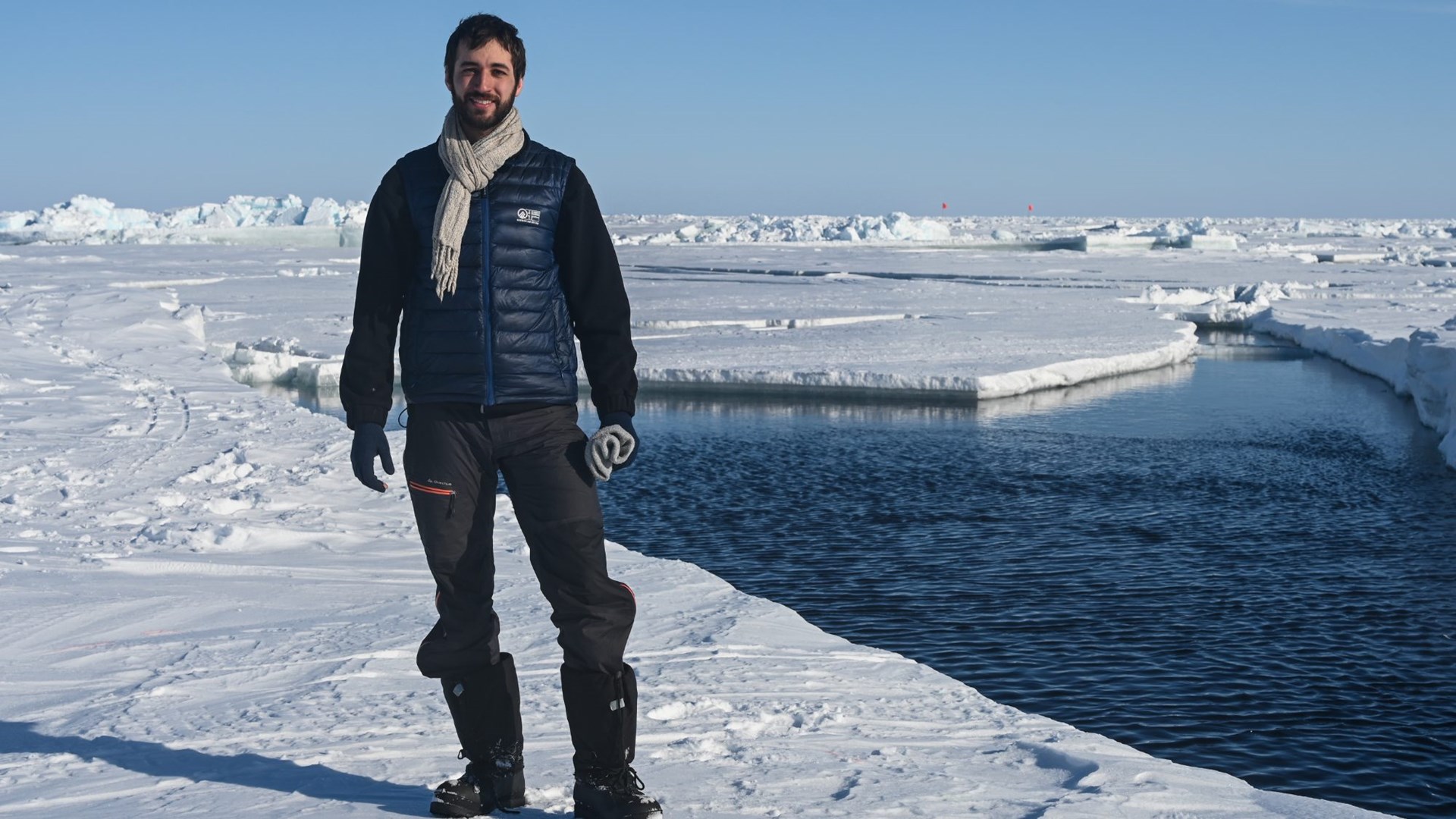 Patric Simões Pereira, Postdoctor at the University of Gothenburg, is now heading back from the international research expedition MOSAiC where he spent six months studying halogenated organic compounds.

What was it like to be part of MOSAiC for such a long time?

– My journey began five months ago when our supply ship Kaptain Dranitsyn first met with the RV Polarstern on December 13 after two weeks of fighting through the Arctic ice shelf. Only after three months would the sun make its first appearance on the sky. Eventually, both legs happened to be completely different. While Leg 2 (phase 2) was characterized by a stable ice floe but harsher working conditions outside due to the darkness and increasing colder and windier conditions, Leg 3 happened to be the time when our ice flow started to slowly break apart due to natural conditions. I feel lucky I could witness all these changes, which in the end is what the Arctic is about.

Can you briefly describe your research?

– My purpose on this expedition is to study climate-active compounds that are produced naturally in the Arctic and interact with the atmosphere. More precisely, I am studying halogenated organic compounds or halocarbons. The name halocarbons might not tell much to many people, but these compounds are active drivers of the atmosphere’s chemistry, having among others the ability to react with ozone and produce aerosols.

– Yet, despite halocarbons being an important element of the Arctic, with an even bigger role now that the extent of the Arctic ice shelf is decreasing on a yearly basis, we don’t know much about them, how they are formed and how they move to the different interfaces of the Arctic, the ocean, the ice and the atmosphere. And for this, there is no way around. I need to go to the field and collect numerous samples from each single interface. The main focus of the work is to take ice cores, which obviously is a central component of the Arctic. And not just one type of ice, but all the different categories of ice that exist and that we could get hold on. The ice cores were then taken back onboard for further processing.

What did the return of the sun mean for you?

– During the few weeks before the sun made its first appearance above the horizon, the Arctic sky was lit by a beautiful twilight. While the sun was revolving all around us just below the horizon, the sky acquired a magnificent reddened shade, which filled everyone with awe. On a scientific level, the return of the sun was well anticipated. The sun is central to the Arctic climate and ecosystems, and Leg 3 people most definitively came prepared, having brought with them many new instruments and skills to capture this transition.

What were the challenges?

– With an extremely low margin for error, any fieldwork needs to be well planned. A routine habit to adopt on the field was to continually check each other that no one was developing frostbite on their face or hands. Then came the breaking up of our ice floe beginning of March, which put some of our instruments at risk and therefore required immediate action from the scientists, but also further limited the accessibility to our study sites. The pandemic, and the adopted international measures to combat it, eventually had a direct impact on our expedition, resulting in the delay of our exchange with the Leg 4 people, as the rotation could not go on as planned due to safety reasons.

– This expedition has met all my expectations, on a scientific as well as on a personal level. I had an amazing and unforgettable time in the Arctic surrounded by incredible nature and more incredible people. More importantly, during all this time we have been collecting an extensive and unique dataset that undeniably will allow us to understand the Arctic climate as never before. The data comes from deep and shallow ocean waters, various types of ice and by continuous measurements of the atmosphere. It will take several months, even years, to process all the data and relate them with other datasets, but I feel I achieved my mission and can now leave this floe with the feeling of having completed something big and useful.

When are you going home?

– After a period of uncertainty because of the ongoing pandemic, our exchange had to be postponed by two months. The current plan is now to have an exchange in Svalbard by the end of May, to then return to Bremerhaven, Germany, by the beginning of June. Upon arriving in Germany, I will then pursue my journey to Gothenburg.

– It has merely been an incredible opportunity to be here, and this would not have been possible without the help of many people, especially to the Swedish Polar Research Secretariat for their kind support in my research and my colleague and project leader Katarina Abrahamsson with whom I look forward to working on the data. I am also truly grateful to my family and friends, and especially to my partner Sofia, for all their encouragements and support during this long journey away from home!