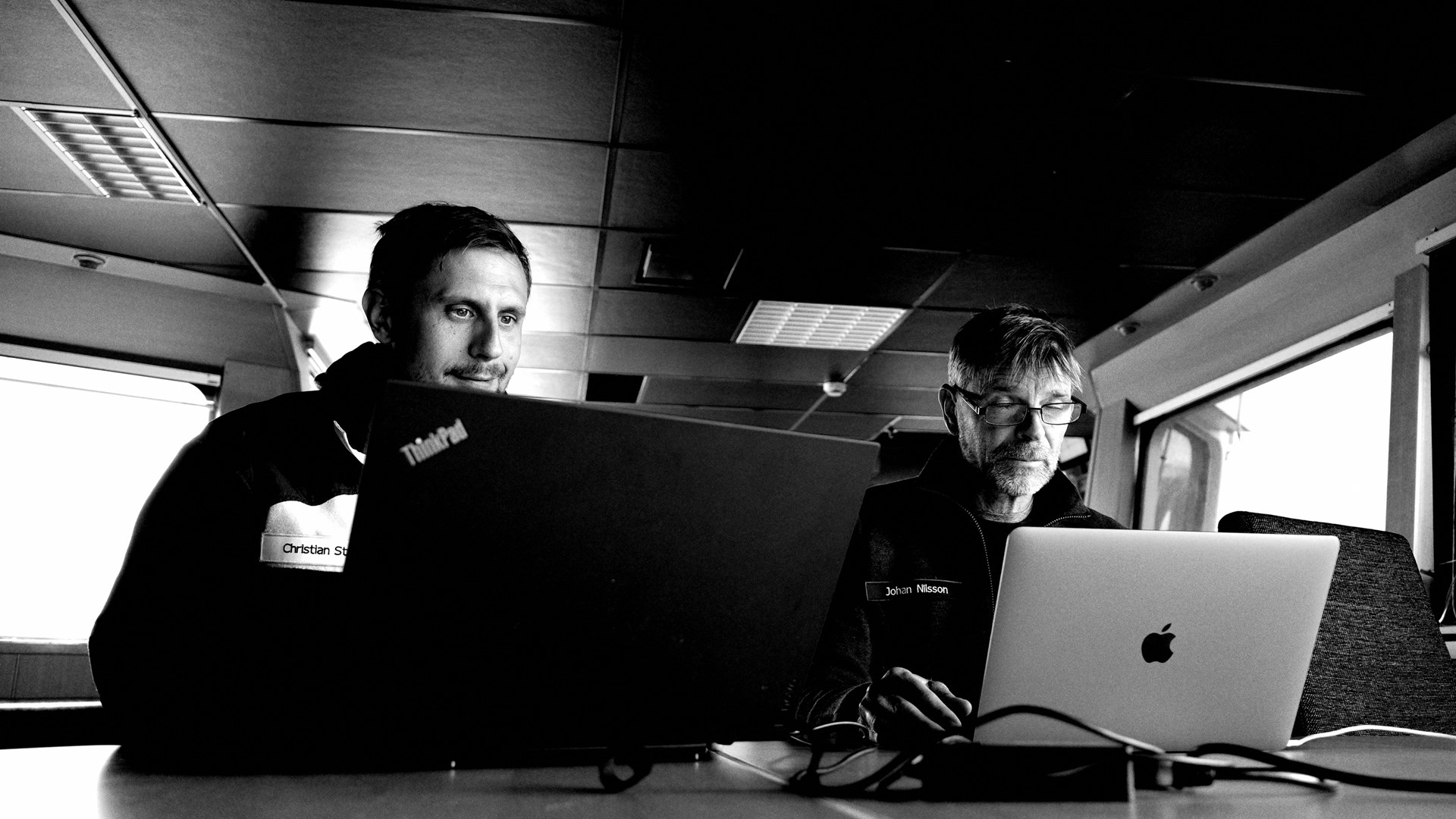 Christian Stranne is an Assistant Professor at the Department of Geological Sciences, Stockholm University. He was one of the scientists on the Ryder 2019 Expedition to northern Greenland with the icebreaker Oden between August 5 and September 12. The purpose was to study the local environment where the Ryder Glacier meets the ocean and to learn more about outlet glaciers and how they can influence sea levels in a changing climate.

– This research is vital for improving our understanding of the links between climate warming and sea level rise, where Greenland outlet glaciers can play an important role. There are several large and important outlet glaciers along the northern Greenland coast, but due to tough weather and sea ice conditions, our knowledge about their local environment is limited. This is especially true for the Ryder Glacier, which is the third-largest outlet glacier in northern Greenland. The Ryder 2019 Expedition became the first icebreaker expedition ever to reach the Sherard Osborn fjord where the Ryder Glacier ends, which it does in the form of a 25-kilometer-long glacier tongue that extends from the glacier into the fjord, says Christian Stranne.

Christian Stranne’s focus is partly on how the ocean may influence the dynamics and stability of outlet glaciers. The Swedish Research Council funds the research, and it is conducted together with, among others, Professor Martin Jakobsson, Professor Johan Nilsson and PhD-student Julia Muchowski at Stockholm University. During the expedition, the first-ever hydrographic observations were made in the Sherard Osborn fjord. These data will help the researchers to understand how the Ryder Glacier is affected by the so-called Atlantic Layer, a relatively warm and salty body of water originating in the North Atlantic.

– The Atlantic water goes in a circle over the Arctic Ocean before reaching the northern Greenland coast. This water mass extends from a depth of about 300 meters down to around 500 meters. Because it is relatively warm, it has been found to influence the melt rate of outlet glaciers in this region, including the Petermann glacier which lies further south along the coast. Rapid declines in ice tongues around Greenland have been observed in recent decades, and it has been argued that an observed increase in temperature of the Atlantic Layer could be the main cause, says Christian Stranne.

Here, Ryder differs from other outlet glaciers because the trend since the 1950s is the opposite – instead of melting, a net growth of Ryder’s ice tongue has been observed.

– Because no icebreaker has been in the area before the Ryder 2019 Expedition, it was not known if the bottom topography of Sherard Osborn Fjord allowed Atlantic water to reach the floating ice tongue at the Ryder Glacier. The preliminary results from the Ryder expedition support our initial hypothesis that the high stability of the Ryder glacier may be related to the local seafloor topography and that it prevents warm Atlantic water from getting in direct contact with the glacier’s ice.

Worked as a team

The dramatic landscape, the wildlife, as well as the work on board, made a strong impression on Christian Stranne.

– The coordination and implementation of the expedition were both impressive and inspiring. I think the general attitude among the researchers on board was that we worked as one team that together strived towards the same goal but from different angles. It helped to make the Ryder 2019 Expedition the most rewarding and successful expedition in my career to date.

– I am confident that the Ryder 2019 Expedition will lead to several ground-breaking discoveries and I look forward to continuing collaborating with Ryder 2019 researchers over the coming years, to analyse data, discuss results and to publish interesting and relevant research articles.

“Life on board is completely dominated by work – I try to work all hours of the day, and we are collecting data around the clock every day of the week. Icebreaker expeditions are expensive and often provide opportunities to obtain unique data, which is why you must always do everything you can to optimise the use of time. Several aspects make Oden an excellent research platform. In addition to its fantastic ice-breaking capabilities and the skilled and very experienced crew, Oden has common spaces, including the bridge, where researchers can work, discuss current events or enjoy the fantastic panoramic view. The food is outstanding, and there is a well-equipped gym, a cinema, a table tennis table, a dartboard, a bar, a small library, and two saunas – all to make life on board as comfortable as possible.” - Christian Stranne