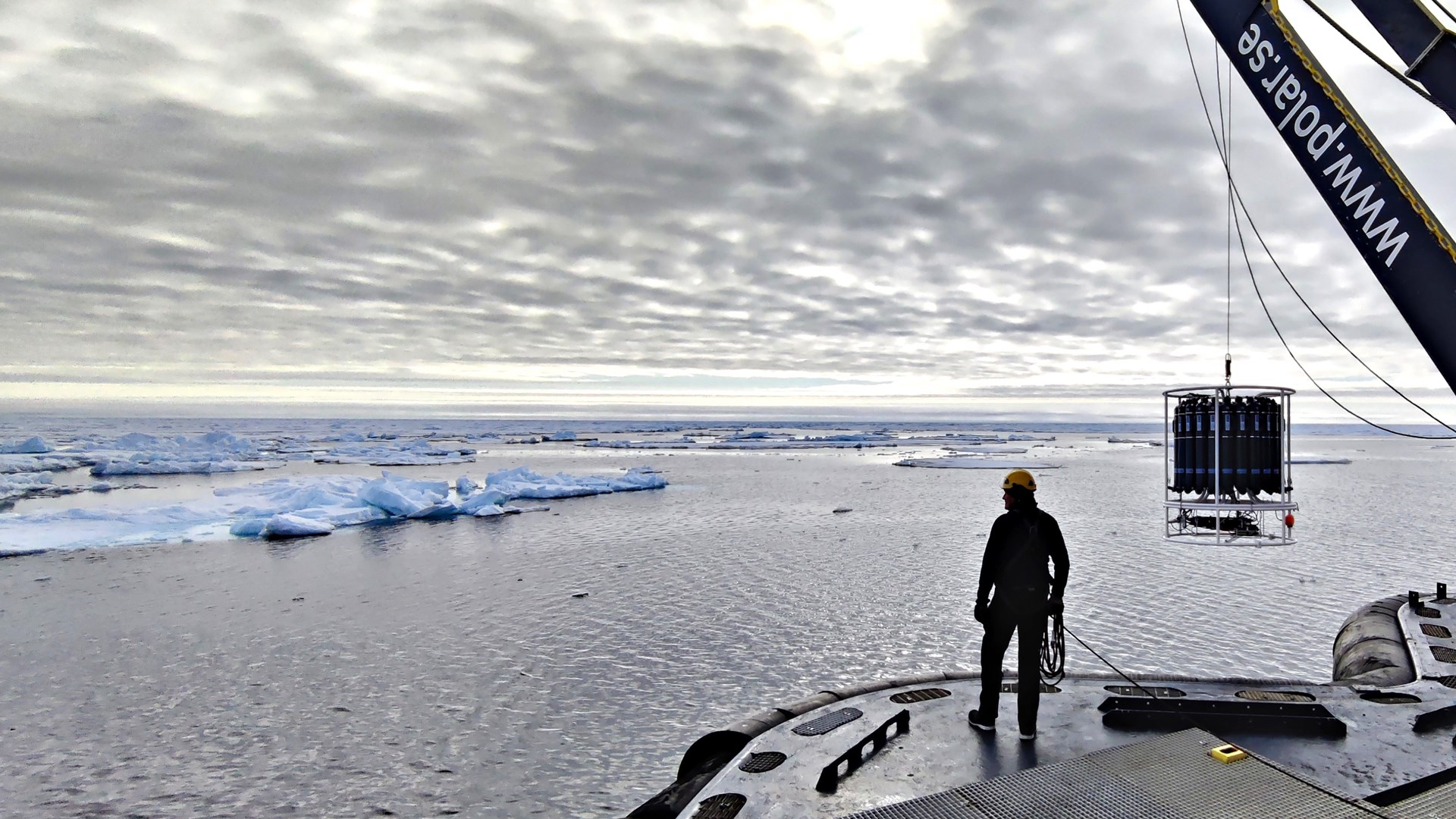 The CTD/Rosette, one of the marine scientists' most important tools, is about to be deployed from the aft of Oden to collect water samples. Photo: Adam Ulfsbo.

Adam Ulfsbo is a researcher at the Department of Marine Sciences at the University of Gothenburg and was one of the participants in the research expedition Synoptic Arctic Survey 2021 with the icebreaker Oden. There he investigated processes and factors behind changes in carbon storage and ocean acidification.

– Ocean acidification has been shown to have harmful effects on many forms of marine life and is expected to affect fish stocks and marine ecosystems in the Arctic. A quarter of the carbon dioxide (CO2) emitted each year is absorbed by the oceans, mitigating global warming. This increased uptake of CO2 leads to ocean acidification, which among other things means reduced pH value and lower carbonate ion content, says Adam Ulfsbo who can look back on a successful expedition, and continues:

– The strongest impression from the expedition was all the fantastic interactions with the other researchers and the crew after spending more than a year with restrictions and social distancing during the pandemic.

The Arctic Ocean is particularly sensitive to ocean acidification due to low seawater temperatures and high freshwater input. The cold water has high CO2 solubility and thus the natural concentration of inorganic carbon is large as is the concentration of carbonic acid. Even a small increase in CO2 may lead to the water becoming undersaturated with respect to calcium carbonate. Lower concentrations of carbonate ions also mean reduced buffer capacity of seawater.

Critical thresholds have already been surpassed in some regions of the Arctic Ocean, such as the upper halocline of the Canada Basin and the shallow East Siberian Sea. According to Adam Ulfsbo, it is important that we understand the underlying driving forces for improving climate models and management strategies.

– In the next few decades, most other regions will follow the same development with potentially serious effects on the marine ecosystem. Imperfect representation of local processes in global and regional climate models limits the ability to project the response from specific areas, including the timing of acidification, on seasonal scales. The preliminary results from the expedition show, among other things, an increase in the carbon content of the Atlantic water masses in the Arctic Ocean, at a depth of 150 to 1,500 meters, which can be traced to the increasing levels of CO2 in the atmosphere and the inflowing water from the Atlantic Ocean.

One of the least studied areas

The measurements took place near the North Pole and north of Greenland, where the thickest ice is typically found. This is due to the large-scale surface circulation (Transpolar Drift) that transports ice from the Siberian Arctic across the central deep basins. The pack ice that does not melt or is exported out of the Fram Strait accumulates and turns into multi-year pack ice north of Greenland.

"Oden is one of the most capable icebreakers in the world and is one of very few vessels that can reach this area."

– Because of the thicker ice and the general inaccessibility of the area, even in summer, this is one of the least studied regions in the Arctic Ocean. Oden is one of the most capable icebreakers in the world and is one of very few vessels that can reach this area.

According to Adam Ulfsbo, international collaboration is key to continuing to keep progressing the science forward and to facilitate the collection of new observations.

– Many expeditions are inherently international by nature to ensure that the scientific expertise is at the highest level. Although Sweden alone cannot cover all of the Arctic Ocean, we are fortunate to have Oden as a research platform to go where other vessels will not.

Workplace with a view

Adam Ulfsbo is an experienced polar researcher and he has previously been on several polar expeditions. Given the cost of icebreaker expeditions and the ability to obtain unique data, Adam points out that it is important to get the most out of time on board.

– Life on board is completely dominated by work – we collect samples and data around the clock every day of the week. Life on board is often much easier than life back on shore. You are served delicious meals every day and there is always coffee and food available, should you happen to be working the night shift. In addition to its fantastic ice-breaking capabilities and the skilled and highly experienced crew, Oden has common spaces, including the bridge, where researchers can work and discuss current events, or simply enjoy the fantastic panoramic view.

The Oden Expedition 2021 is the Swedish contribution to the international research initiative Synoptic Arctic Survey (SAS). The overall goal for SAS is to generate a comprehensive pan-Arctic data set that enables a complete characterization of Arctic hydrography and circulation, anthropogenic carbon uptake and ocean acidification, trace element distribution and pollution, and the function and productivity of organisms and ecosystems. SAS involves the coordination of several countries (e.g., the United States, Canada, Norway, Japan, China and South Korea) and research vessels in different regions of the Arctic Ocean during 2020–2022.