Pauline Snoeijs Leijonmalm, Professor of Marine Ecology at Stockholm University, participated in the first leg of five during the polar expedition MOSAiC. A strong memory is when the German research icebreaker RV Polarstern anchored to an ice floe to drift with the pack ice in the Arctic Ocean for a year.

– I will never forget the fascinating, alternating noisy and whistling sounds, caused by pressure when a ship freezes into the ice, says Pauline Snoeijs Leijonmalm who led two projects during MOSAiC.

Five other scientists continued with the field work during Legs 2–4, which meant that data collection for the projects took place in the Central Arctic Ocean from October 2019 to June 2020. One project is about finding out if there are any fish stocks in the area, while the scientists in the other project will complement the knowledge of global microbial diversity with data from the Central Arctic Ocean.

Due to global warming, which occurs twice as fast in the Arctic compared to the rest of the planet, the Central Arctic Ocean is becoming increasingly accessible to fishing vessels during the summer. The area that the scientists’ study falls under the “High Seas”, which means that they are situated outside national jurisdictions, and thus international agreements are extremely important.

– The rapid reduction of sea ice in the Arctic has triggered that the question of possible fisheries in the Central Arctic Ocean is being discussed at national and international political levels. Data on fish stocks are lacking completely – nobody has actually ever caught a fish in an area of 3.3 million km2 other than juvenile polar cod that live in the sea ice. Thus, any assessment of the sustainability of a future fishery in the Central Arctic Ocean has been impossible. In this project we collect scientific information that will be the base for future decisions on the international management of the Central Arctic Ocean ecosystem, says Pauline Snoeijs Leijonmalm.

– Nutrient-rich continental Arctic seas such as the Barents Sea have large fish stocks, but the deep basins in the Central Arctic Ocean are extremely nutrient-poor and the amount of fish was expected to be low – which we were able to confirm during MOSAiC.

The project targets fish stocks in the water column down to ca. 600-meter depth and is funded by the European Commission. It is linked to an international agreement to prevent unregulated fisheries in the High Seas area of the Central Arctic Ocean. Nine out of ten partners have already signed the agreement and when the last country approves the agreement, commercial fishing will be prevented for the next 16 years.

– The agreement takes a precautionary approach and puts “science first”, which means that a scientific assessment of the distribution of possible fish stocks in the Central Arctic Ocean is carried out and evaluated before any commercial fisheries are allowed. This project is first to collect fish data for this purpose. During MOSAiC data were collected with hydroacoustics, video recording with a deep-sea camera system, sampling of fish 200-500 m below the ice cover and collecting samples for eDNA analyses. The DNA samples will be used to analyse the presence of fish, zooplankton (fish food), and mammals (fish predators).

The second project is about mapping the genomes of microorganisms using DNA analysis and bioinformatics (metagenomics), and to analyse which genes are active in carbon and nitrogen metabolism (using RNA analysis). The results will be coupled to seasonal changes and global warming in combination. The Central Arctic Ocean is one of the world’s marine ecosystems we know the least about, and most of the project’s results will be new for science. For example, the project studies the ability of microorganisms to metabolize organic material, which likely includes previously unknown processes that take place during the six-month polar night.

– In the summer of 2012, we studied microbial processes related to the melting of sea ice, which is increasing dramatically in the Central Arctic Ocean. MOSAiC gives us a chance to compare our previous results with what happens during winter. As the ecosystem moves rapidly from a permanent to a seasonally ice-covered sea, the microbial composition in the ecosystem changes and thereby also the microbial uptake of carbon and nitrogen also changes during the year. This, in turn, may affect global carbon and nitrogen cycling, says Pauline Snoeijs Leijonmalm.

The measurements were made on water samples taken at different water depths and on ice cores that were melted on board. Among other things, DNA and RNA (a molecule that translates the DNA coding to form proteins) were saved on sterile filters that were frozen at -80 °C. A total of 34 incubation experiments were also carried out on board with 140 liters of seawater from three different depths.

Although Pauline Snoeijs Leijonmalm is satisfied with the work done during MOSAiC, not everything went as planned.

– We lost a month’s data due to the Covid-19 pandemic when RV Polarstern was forced to leave the ice floe and steam to Svalbard for exchanging expedition participants. When the ship breaks ice, we get no useful acoustic data. As for the video recordings, we only got 100 days instead of the estimated 300, due to damaged electrical and data cables. This was caused by extensive ice movements, especially when we had storms, and animals (polar bears and foxes). However, we are very happy with the 100 days we got! The sampling of eDNA was very good in the winter when we had an operative ice hole for the CTD rosette*, but when the CTD hole was destroyed by ice movements, we could not sample deep water for a long time. During the upcoming expedition Synoptic Arctic Survey 2021 with the icebreaker Oden, we will use the same methods for data collection for both projects, but we will be better prepared, e.g. we will have newly developed equipment for sampling fish.

*= a measuring device for temperature, salinity, oxygen and more, which also can take water samples at pre-programmed depths.

Facts about the research projects

Project 1: Uncovering the largest blind spot on the map of the world’s fish stocks: mesopelagic fish, their dependence on sea ice, and their role in the Central Arctic Ocean food web

EFICA Consortium: European Fisheries Inventory in the Central Arctic Ocean (EFICA) Consortium with Stockholm University as coordinator. The work in the consortium is based on the Agreement to Prevent Unregulated High Seas Fisheries in the Central Arctic Ocean (CAO) which was signed in 2018 by nine countries (China, Denmark/Greenland, Iceland, Japan, Canada, Norway, Russia, South Korea, USA) and the EU. The agreement is in the process of ratification (approval by the respective parliaments/governments), and is now awaiting the final approval of only one country.

Project 2: Uncovering the seasonality of sympagic and pelagic microbial metabolic diversity, productivity and nutrient cycling in the Central Arctic Ocean with emphasis on carbon and nitrogen metabolism 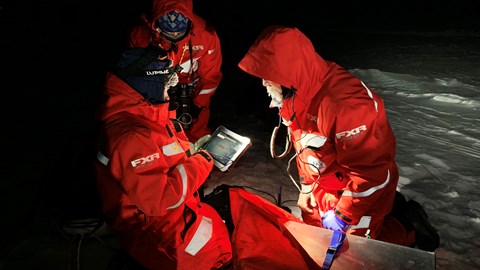 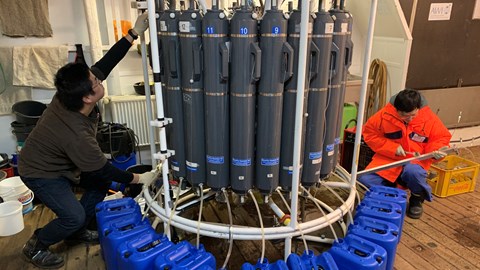 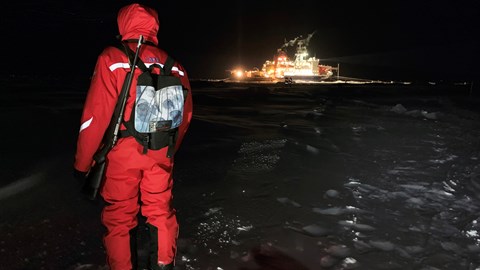 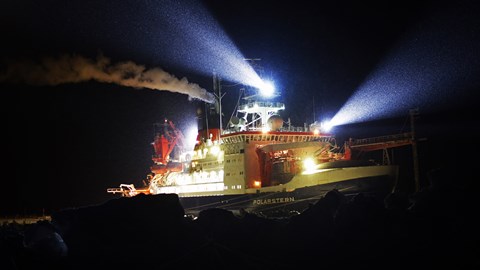 On the MOSAiC expedition, experts from 20 nations studied the Arctic for an entire year. For this purpose, from autumn 2019 to autumn 2020 the German icebreaker Polarstern drifted across the Arctic Ocean, trapped in the sea ice. MOSAiC is coordinated by the Alfred Wegener Institute, Helmholtz Centre for Polar and Marine Research (AWI). Over 80 scientific institutes are working together in a research consortium. The expedition’s total budget is over 140 million euros. For the latest news straight from the Arctic, check the MOSAiC channels on Twitter (@MOSAiCArctic) and Instagram (@mosaic_expedition) using the hashtags #MOSAiCexpedition, #Arctic and #icedrift. Read more about the expedition on www.mosaic-expedition.org and follow Polarstern’s drift route and the work on board on www.follow.mosaic-expedition.org.